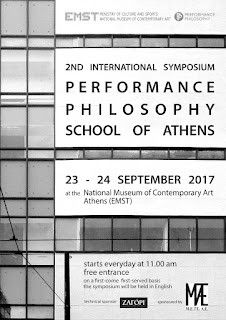 
The 2nd International Symposium: Performance Philosophy School of Athens was organized by Performance Philosophy Network in collaboration with National Museum of Contemporary Art, Athens (EMST). The symposium included lecture presentations, performance lectures, workshops, video projections and live performances. Presenters from different fields including art theory, dance, performance art, architecture, sculpture and poetry, came together to present their works and research on the subject of ‘Performance Dance’. Some of the questions that were addressed are the following:
In what ways do dance movement and the visual arts intertwine? How do dance images make us think?
How does the relationship between dance movement, visual arts and philosophy benefit or influence these fields?


Host - Coffee Morning
Discussing Discussions in/as Performance by Trio Collective
14 January 2014
Chisenhale Dance Space, London, UK
Our discussion of Discussion touched on current trends in integrating conversation into performances, in the form of pre-show talks, post-show Q&A’s, etc. as well as the recent emergence of certain conversational formats such as Choreographic Forum, Dance and Critical Theory Group, Coffee Mornings, Groundswell Meetings, etc. in the field of dance. It will aim to unpack ways that discussion can be a mode of production for researching, working, communicating, promoting, rehearsing, bonding, exchanging, and performing. Must we “do?” Can’t we just “talk?” Discuss.
We can talk about all of these things, none of these things, and more.